As 2019 draws to a close, SORE wants to wish all its supporters the best of the season. We also want to take the opportunity to update our supporters and all interested residents on the current status of Benny Marotta’s attempt to redevelop the Rand Estate.

Where are we Now?

SORE has been given party status in every legal forum in which Mr. Marotta’s companies are challenging the Town’s heritage designations or attempting to advance his hotel proposal. SORE believes the hotel proposal, with its close to 400 parking spots and massive function rooms, would result in the Rand Estate turning into a convention centre and wedding factory. More importantly, our experts have advised us that the proposal is inconsistent with the Town’s Official Plan and incompatible with the acknowledged and extensive heritage attributes of this nationally-significant estate property. SORE further believes that the Marotta proposal, unlike the Romance Inn, will result in endless noise, light and traffic conflicts with the established residential neighbourhood in which the Rand Estate is situated.

The Town went through an exhaustive two-year planning process less than 10 years ago for the proposed Romance Inn that resulted in a narrow Council decision to approve a land use change for part of Randwood. The Romance Inn as approved by Council in 2011 was a heavily negotiated compromise for a boutique hotel that respected the heritage character and attributes of the Rand Estate. Everyone involved with the process believed that careful limits had been placed on every aspect of that proposal to maintain the look and feel of the Rand Estate and NOTL as a special place. Mr. Marotta must have been aware of the Romance Inn compromise when he bought the various parcels of the Rand Estate. Had he simply proceeded with what was already approved for Randwood (the Romance Inn) after two years of public debate, negotiation and compromise by a number of concerned citizens and heritage experts, there would be little reason to object today.

We view Mr. Marotta’s proposals for the Rand Estate as a watershed moment for the future of NOTL. The town that most of us grew up in or moved here to enjoy is at risk. If the Marotta companies are allowed to build an ill-conceived hotel/convention centre/wedding factory and 160-unit subdivision on this signature piece of property, it will be open season in NOTL for all developers. We stand for the premise that our Town, and what it represents, is worth protecting for the benefit of those who live here and for the many thousands who visit each year precisely because of the character of the town.

We thank you for your continued support. SORE would also like to acknowledge, with gratitude, the unwavering commitment of our elected Council to defend our Official Plan and our irreplaceable heritage resources. While we regret the significant costs both the Town and SORE have incurred to respond to the various legal proceedings initiated by Mr. Marotta, the alternative – rolling over for him and every developer who just sees NOTL as an opportunity to make money – is unthinkable.

Please visit our website at sorenotl.ca for more information and to sign up for email alerts about ongoing developments.

Click to view the PDF version of this SORE update

SORE is thrilled to report that the court application by the Marotta companies to overturn your elected Council’s decision to proceed with designation of the Rand Estate under the Ontario Heritage Act has been completely rejected.

In a decision released today by the Ontario Superior Court, Madame Justice Walters found against the Marotta group on every ground and dismissed their application with costs payable to both the Town and to SORE.

This is a decisive victory for both the Town and SORE. For the last year, the now clearly spurious attempt by the Marotta group lawyer to hold the Town and SORE hostage to  this legal challenge has impaired the ability of the Town to proceed with the prosecution of the Marotta companies for alleged violations of the Heritage Act for last November’s outrageous clear-cutting at the Rand Estate.  That prosecution can now proceed and SORE will be watching that closely.

The Conservation Review Board can now also complete its hearing on the review requested by the Marotta group of the Town’s notices of intent to designate the Rand Estate under the Heritage Act.  We look forward to that hearing and to the CRB’s recommendations to Town Council.

This decision is a watershed moment for NOTL generally and in particular for the many hundreds of residents appalled by the Marotta Randwood proposals and the decimation of landscape features last November by the Marotta group.   It is hopefully the beginning of the end of this unfortunate saga.

[Below is a PDF of the court decision.]

Read PDF of the Court Decision 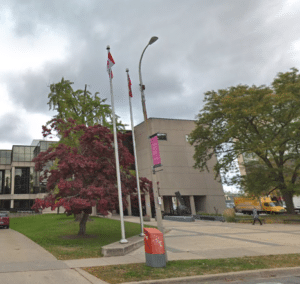 The hearing by Madame Justice Walters of the challenge by the Marotta group to your Council's notice of intent to designate the Rand Estate under the Heritage Act concluded late Tuesday afternoon, Jan. 7, in St. Catharines.  The hearing took place over two days, with the Marotta group lawyer … END_OF_DOCUMENT_TOKEN_TO_BE_REPLACED

As reported on in our last update, the Conservation Review Board (CRB) held a prehearing conference on Monday, December 2.  The CRB heard submissions from the Town and SORE that the uncertainty about the Marotta group's challenges to the Town's  designation of the Rand Estate under the Heritage Act … END_OF_DOCUMENT_TOKEN_TO_BE_REPLACED

In a not entirely surprising move, Benny Marotta's lawyer advised the Local Planning Appeal Tribunal late yesterday that he was withdrawing the Marotta group's zoning appeal to LPAT.  LPAT has cancelled the July 29 scheduled hearing, at which the Town and SORE were poised to ask the Tribunal to set … END_OF_DOCUMENT_TOKEN_TO_BE_REPLACED 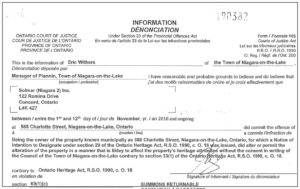 SORE has learned that the Town has recently laid four charges against two of Benny Marotta's companies under the Ontario Heritage Act. These are quasi-criminal charges under our legal system and can result in substantial fines for corporations and jail time for individuals upon conviction. … END_OF_DOCUMENT_TOKEN_TO_BE_REPLACED

SORE was granted party status by the Local Planning Appeal Tribunal (LPAT) on May 9 for Benny Marotta's appeal to that Tribunal. To recap, Mr. Marotta has appealed the "non-decision" by the last NOTL Council on his convention centre and hotel proposal to LPAT‎. It is unfortunate that Mr. Marotta … END_OF_DOCUMENT_TOKEN_TO_BE_REPLACED

SORE is pleased to report that it has received the decision of Madame Justice Donahue of the Ontario Superior Court following the April 4 proceeding in St. Catharines. SORE has been granted full party status to intervene in the court challenge brought by Benny Marotta's companies of your elected … END_OF_DOCUMENT_TOKEN_TO_BE_REPLACED